While military and commercial aircraft share some common conventions with respect to types, color and usage of external lights, differences exist in the goals and capabilities of similar systems. An obvious example might be the use of external lighting on stealth aircraft. It doesn?t help the cause if the enemy can see your wingtip lighting while you are miles from your approach. But on a commercial aircraft, not being able to see your wingtip lighting during a night approach could be tantamount to disaster.

Still, the common problems of visibility must be solved in non-combat situations and It turns out that something as seemingly simple as a light bulb, has many complexities when placed in the harsh environment of a jet during approach to a crowded city area runway. As designers of lighting systems on aircraft like the F16 and B1 bomber, PHT Aerospace understands the requirements of Aircraft Lighting Systems in both operational and production environments.

Aircraft navigation lights are required to be lighted on aircraft operated on the surface and in flight from sunset to sunrise. In addition, aircraft equipped with an anti-collision light system are required to operate that light system during all types of operations (day and night). However, during any adverse meteorological conditions, the pilot-in-command may determine that the anti-collision lights should be turned off when their light output would constitute a hazard to safety.

An aircraft anti-collision light system can use one or more rotating beacons and/or strobe lights. These are typically colored either red or white and have stronger intensities as compared to other aircraft. Many aircraft have both a rotating beacon and a strobe light system. Supplementary strobe lights should be turned off on the ground when they adversely affect ground personnel or other pilots, and in flight when there are reflections from clouds. 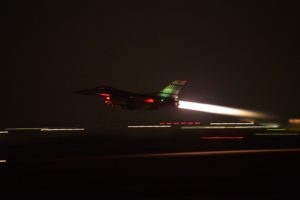 Bright white landing lights are usually fitted to most planes for enhanced visibility during landing. These lights can also be used to illuminate the runway at poorly lit airports. They are often required for night landings but also commonly used during the day as well to make the plane more noticeable. While the usage of these lights is common, their location can vary from plane to plane. Landing lights may be located in the wing root, in the outboard wing, or somewhere along the forward fuselage. Some aircraft are equipped with multiple sets of landing lights in more than one of these locations. The 737, for example, has inboard landing lights located in the wing root as well as outboard landing lights in the outboard flap fairings.

PHT Aerospace has the unique understanding of how to create form-fit-function replacement systems in the military and commercial aviation world. PHT has reverse engineered lighting systems for complex aircraft like the B1 bomber and the F16 and manages all production for these systems.

PHT can design and assume production of your aircraft lighting system be it commercial or military. We specialize in small quantity production.